In his new book, Baby Bust, Stewart Friedman reveals some surprising changes in the way men and women view parenthood. In October 1987, I became a father. My mind flooded with questions, especially this one:  What am I going to do to make the world a safe one for my baby to grow up in? Obsessed with this question, I brought a version of it to the Wharton MBA students I was teaching about organizational behavior. I asked them: What responsibility do you have as future business leaders to nurture not just the next generation of employee talent, but the next generation of people in our society? And if you choose to become parents, how will you manage to do so in a way that works for you, your family, your business, and your community? 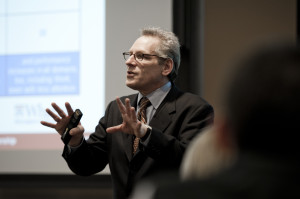 Hungry for knowledge, they replied with a question of their own: “You’re the professor. Can’t you just tell us?”

Thus began a conversation with students, colleagues, and thousands of people in public and private-sector organizations that I have been engaged in ever since, as founder of the Work/Life Integration Project at the Wharton School at the University of Pennsylvania. Over the course of two decades, we’ve surveyed hundreds of undergraduates – first, nearly 500 members of the 1992 graduating class, and later, about 300 members of the class of 2012.

We wanted to find out how these students thought about work, life, and family – and how their perceptions varied. The most striking one: parenthood. In 1992, three fourths of the students we surveyed said they planned to have children. Twenty years later, that number had dropped to less than half. These percentages were nearly the same for men and women.

For women in the class of 1992, motherhood fulfilled a need to help others. But for women now, helping others can be achieved through social impact or a successful career. Motherhood is no longer viewed as the sole path to nurturing, and “family” means something different than it used to: it’s now less about creating a family with children of one’s own and more about networks of friends and a stronger connection to one’s family of origin.

At the same time, we found that young women’s hopes for and expectations of equitable sharing on the work and home fronts are on the wane:  young women today believe that something has to give, even if that means adopting more traditional roles at points along life’s journey. Herein lies an opportunity for change.

Millennial men, by contrast, are not so tightly bound to the constraints of the breadwinner role.  And yet while many of the students we studied still valued the idea of being a parent, they just couldn’t quite see how children realistically fit into the picture. In the context of a much longer workweek than generations before them, the reality is that in most families both spouses work, and because the U.S. offers scant support for children and families when compared with other countries in the developed world,  young men wondered: could children realistically fit into the picture? As a result, the men we surveyed are abstaining from fatherhood in larger numbers than previous generations.

Men are also less inclined than their own fathers to think of themselves as sole breadwinners. Their conceptions of their roles are changing. Doing good in the world and rearing a family are linked in the minds of today’s young men: Those who want to help others through their work are expecting greater harmony between their work and family lives because they view childrearing as a contribution to the common weal.

The Revolution Is Here

With men’s changing attitudes, egalitarianism is on the rise, especially in terms of beliefs about working motherhood. Young men do not merely accept women as peers in the workplace, they expect women to work, and they want to lean in at home. Both men and women want to be involved in nurturing the next generation.

With men’s changing attitudes, egalitarianism is on the rise, especially in terms of beliefs about working motherhood. Young men do not merely accept women as peers in the workplace, they expect women to work, and they want to lean in at home. Both men and women want to be involved in nurturing the next generation.

But We Must Offer Support

The mindset of Millennials is new – dual-career families are a given and being an involved parent is, too.  But our institutions, both public and private, have not kept pace with the advent of now-dominant family structures – dual-career couples and single-parent families.  Instead they still presume a stay-at-home helpmate. This is no longer a women’s issue, but a human issue with significant economic, social, cultural, and political implications.

For those who want to become parents, but cannot figure out how to make this work, we, as a society, need to make some important changes. For instance, if educational systems changed so that our children, like those in other developed nations, spent longer hours at school, there would be more support working parents. If our business organizations supported not just flexible workweek policies, but also flexible career paths so that it became the norm for both men and women to on- and off-ramp, this too would make the prospect of having both a career and children seem less daunting and less stigmatized.

There’s more we must do to make the world a good one for the next generation. And because they are in greater agreement about what it takes, men and women can now work together to find solutions that make sense.

10 reasons why you would love this theme